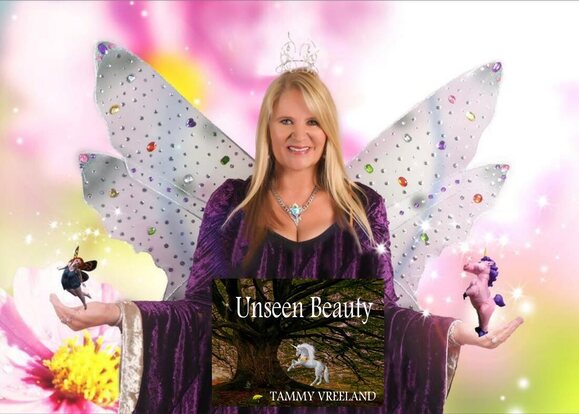 While playing in the woods one day, Ani sees a magical Unicorn!  Ani has never seen such a beautiful creature!  Ani learns that beauty can also be seen, in unseen beauty.
Background

Unseen Beauty is my first children's book.  I always played around with the idea of creating a children's book but with all the books that are on the market, I didn't exactly know what I wanted to create.

My husband and I enjoy going to local Renaissance Fairs.  In fact, the town we live in actually crowned him and I as their King and Queen.

As part of the festivities, I wanted to read a story to the children.  I quickly did a search for a children's book with a Renaissance theme.  To my surprise there was little selection.

This got me thinking that perhaps I could write my own Renaissance themed children's book.  Excited, I went to work.  The story came easy.

I wanted to create a gender-less character.  Allowing the children I would be reading to, to be able to relate to the character.  I chose the name Ani in the story for it can either be a girl or boy's name.  Plus, "Ani" is actually a reference to "Any1".  I wrote the story, refraining from using "he" or "she".  And chose "Ruler" instead of "King" or "Queen".  This way, both boys and girls could easily put their selves into the story.

I also wanted to set a moral to it.  To embrace ones that are different from us.  To see an un-seen beauty in all of us.

An added bonus was that I was able to interweave a fond memory of my own.  When my son was very young, he use to proudly bring me Dandelions.  His father would try and tell him it was nothing more than a weed.  But my son saw it as a beautiful flower, as did I. I had a little vase in the kitchen window where I would proudly display my son's beautiful flowers he brought me.

Later in life, he would still surprise me every once in a while handing me a Dandelion.  Even to go as far as to meet me at the airport once, standing there with a Dandelion in his hand.  A priceless memory I will never forget.

So this book, although small, I am hoping will be large in many ways.  Different from the type of books I normally write, one that I hope you will enjoy as much as I enjoyed creating it.
​
Available Now At: